The “Occupancy Detection Data Set” was selected. In general, it represents information about detection occupancy of an office room from light, temperature, humidity, CO2 measurements.

Here is the link: https://archive.ics.uci.edu/ml/datasets/Occupancy+Detection+

Short metadata description for the Occupancy dataset on UCI:

Python Pandas was used for exploring the data.First 5 examples in dataset:

Dataset have 6 attributes and 1 label.

Number of instances and number of attributes align with main information about this dataset on UCI site.

So, attributes types align with main information about this dataset on UCI site.

As I can see, there is no duplicates in Occupancy dataset. To find outliers in dataset I was using boxplot. Columns Light and CO2 have much more outliers unlike other columns. 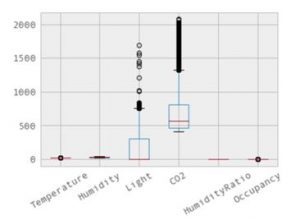 At this stage, I am going to analyze count of outliers, and their maximumvalue. It’s can be done with the help of quantile; in statistics and theory of probability, quantiles are cut points, such that a given random value can’t be greater these cut points values with a fixed probability.

So I have next results with exploring quantiles on Occupancy dataset:

Occupancy dataset have 206 records with values, which differ too much from the average.Generated summary stats for the entire dataset.

Transform data in column which contains date time information in several ones to process them easier.

Transform data in column which contains date time information in several ones to process them easier.

Filter columns Light and CO2. Leaving only that ones, where the values of the certain column within say -3 and +3 standard deviations from mean.

As I could remember, we have 20560 rows and 7 columns in dataset. After transformation and removing outliers dataset has 20127 rows and 9 columns. Check Light and CO2 columns: 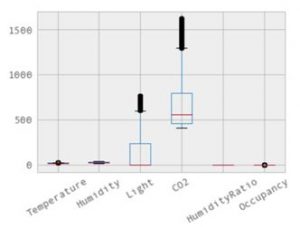 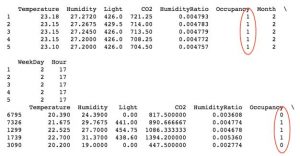 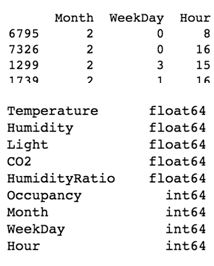 Occupancy dataset was chosen and downloaded from UCI site. This dataset represents the main dependence of the occupancy of a room or office on the following characteristics of a room or office such as date, temperature, humidity and humidity ratio, room lighting level and also the concentration level of carbon dioxide (CO2).

After the first acquaintance with the data the following conclusions are made by me:

a dataset column showing the date and time of the measurement is difficult to process.

It was decided to transform the value in this column to get rid of the object data type and make all the values in the dataset numeric.

Then the graphs, clearly visualizing the data, were built, and it was noticed that there are some values that are too prominent from all data. It was decided to get rid of them in order to avoid noise in the data during it further analysis. These data outliers could be seen on boxplot in the beginning of this report. This graph is in the form of Japanese candles and it reflects the spread of the values of each particular column of the dataset. That points, which are above the top of the candle named outliers, and must be deleted from dataset. As it also could be seen, there are two columns in the dataset, the Light and the CO2, which have outliers.

During all the analysis, python and pandas framework were used.After it analysis, it was decided to apply some transformations on the data. At first, it had to transform date column and extract all special features. “Apply” function of the pandas data frame was used, and date column was transformed into three columns: “Month”, “Week Day”, “Hour”. After that the date column was dropped. It means, that dataset will contain nine columns instead of seven.

I also deleted records, which had abnormal big or small values in Light and CO2 columns as leaving only the ones, where the values of the certain column within -3 and +3 standard deviations from mean.

As result, I had a cleaner data. If we also look on the second boxplot, which represents Light and CO2 columns, we can notice that they had no outliers any more.

And it also was shuffled. As result, we have dataset of about 9K records, and all examples in this dataset are differ from each other, and their common quantity is sufficient for further processing.

In brief, I can summarize the following: after applying all transformations on chosen dataset from UCI we have the following results: